Get the full final leaderboard standings for each division of the 2014 Grind for Life Series here. Top two scores from all the events you enter count towards you final score.

The overall results for the year are in after the last stop of 2014 at Bradenton. You have to skate at least two events out of the four for the year to be in the running for an end of the year award, so only those skaters are shown below.

We hope you can join us for the Awards Ceremony on November 22 at our house, The Boardr Headquarters. We'll have a nice session on the new mini ramp along with a video recap and special awards for each Division.

And one more thing, I love numbers and stats, so here's a bunch from GFL for 2014. Thanks again to everyone that was part of this with us! 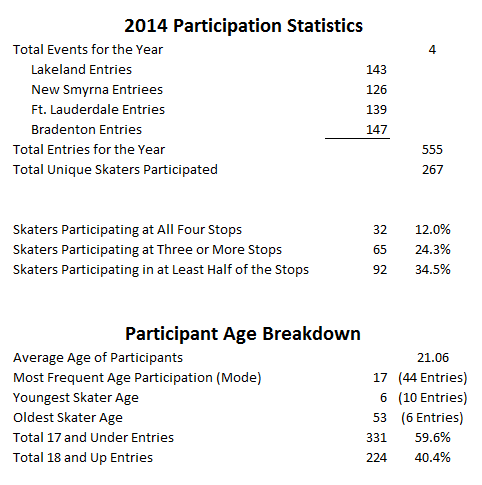 Street 9 and Under Division

Street 30 and Up Division

Bowl 9 and Under Division