We're in the thick of that time of year where skateboarding has all those good times gatherings, contests, after-parties, webcasts, and more. Allow me to fill you in on a few we're associated with. Our skateboard shindig software, The Boardr Live, powers all the digital madness and number crunching behind the scenes while our staff helps make sure everything else goes smooth and fun for you. If you can make it, see you there, thanks!

This week at The Berrics in LA is both the West Coast Regionals on Thursday and the Finals for the whole series on Friday. Leading up to the Finals, four other Regionals stops around the US have the winning shop teams from there competing for the Skate Copa title. After that, you'll be competing for front row after you hear who's doing a show at the After Party.

Vans is bringing its Van Doren Invitational to Canada this weekend with all the action live on Thrasher's site for those who can't pysically get into Canada due to American party fouls and other roadblocks that upset their Customs department. Coming up real quick after that is the Van Doren Huntington Beach edition, too. 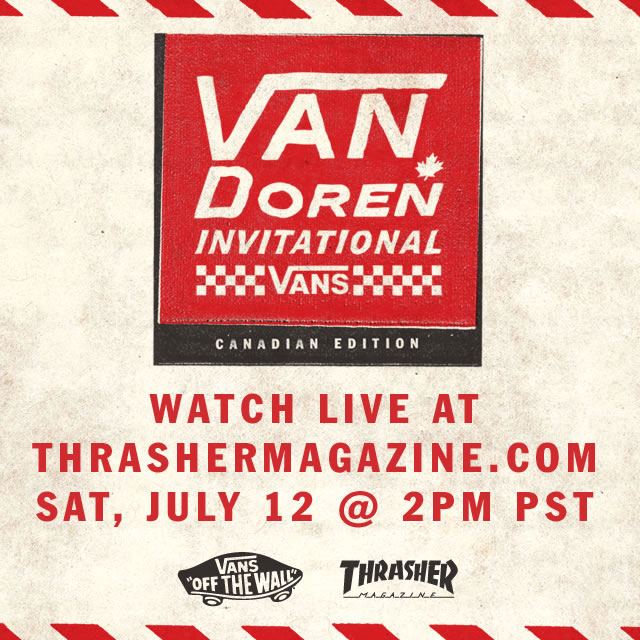 Locally here in Florida, you can find Porpe running a mini-ramp jam while he keeps his mop tight at the Imperial Hair Show. Our homie Jairus running Second 2 None Barbershop and Skate Supply out in Lakeland is throwing this one. We just had to reschedule this one. A new date will be announced soon.

Our friends in Copenhagen consistently throw some of the most fun gatherings of the skateboard year. This year in August is the first Copenhagen Bowl Jam. At Faelledparken there will be shredding all weekend mixed into your usual Tuborg tornado followed by nightlife and an after-party that starts at 2am. I think it's already daylight at that time. You're in for one at CPH as usual.