Before I was awarded the luxury of international travel to the Street League events, back in 2011 I hit up a couple on my own dime just to check them out. This was way before I started writing this column or got the opportunity to announce the Select Series on ESPN3 at the X Games stops.

I’ve been in the contest business for 15 years, so if I’m at an event and have nothing to do but watch the skating, an unusual sense of freedom comes over me. I’m at my best when I’m busy, as are most humans, but it sure is fun to have no responsibilities sometimes. And at those SLS events where I had nothing to do, I made sure I had the most fun possible.

The number one way to do that is to find the free beer, which happened to be in the DC Shoes skybox suite. After downing a few Coors Lights and taking advantage of the BBQ (this story happened in KC), things got turned up.

I was sitting next to longtime friend and legendary NYC skateboarder, Jefferson Pang, who was part of the Zoo York crew at the event. Every time a trick would get done, before the score was posted, we’d yell out what we thought the score was going to be.

This started being the M.O. for each and every trick landed. Finally, another half-drunken skateboard fan suggested that we start making actual bets and joined in. So there we were, holding up dollar bills and screaming at the top of our lungs the second a trick got landed.

The guess closest to the actual score won all the money. Exact guess? Double the money.

This concept caught on rather quickly. Next thing you know we had dozens of fans holding up dollar bills and yelling numbers after each landed trick.

If you’re a fan of drinking games, I suggest trying this at home. Since the next event is in Munich, the world’s beer capital, it just seems like the right thing to do.

I made around $50 that work-free day. 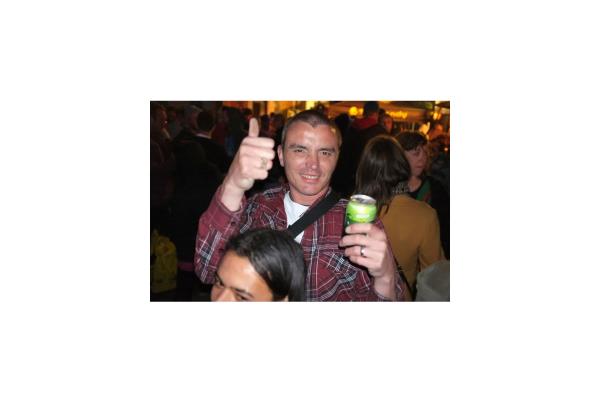 Clem's Corner: Right in the Heart of Darkness
August 2013