Get Rad for Ray

Start the video at 23:00 for Ray's part at the ramp where his wrist is danked! 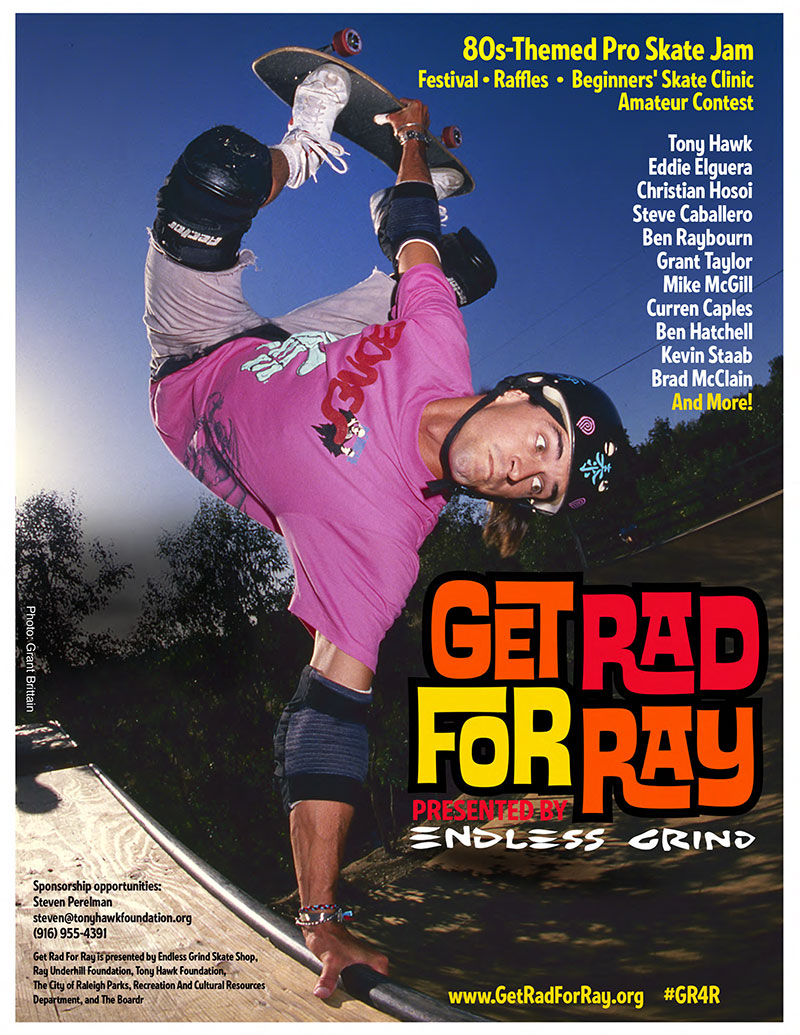 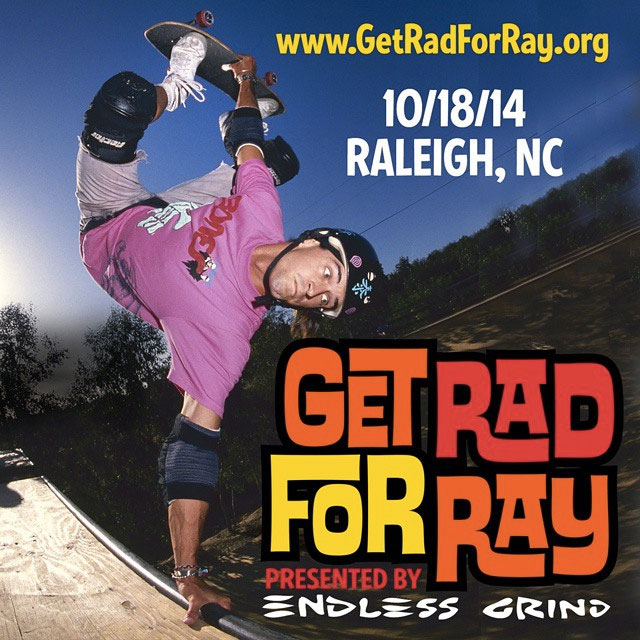 25 September 2014 (Raleigh, NC) – Tony Hawk is bringing the 80s back to Raleigh, North Carolina’s Marsh Creek Skatepark. At least skateboarding’s version of that notorious decade. And he’s not coming alone.

Hawk and friends have organized the Get Rad For Ray Presented By Endless Grind charity event to celebrate the life and legacy of one of skateboarding’s all-time greats, Ray Underhill. A Wilmington, NC native, Underhill was a member of the infamous Bones Brigade squad of the 1980s, a teammate of Hawk’s, and known for his smooth skating style. But his friends remember him best for his kindness, wit, and dedication—his true enduring legacies.

"Ray was a great friend," said Hawk. "We miss him every day, so we’re coming to Raleigh to remember him the best way we know—to skate in his honor while helping others!"

The world lost Ray in 2008, after his long battle with Chordoma, a rare but relentless spinal cancer. To honor his life, Ray’s family and friends have joined the City Of Raleigh to host the inaugural Get Rad For Ray Presented By Endless Grind skateboarding contest and 80s-themed Legends jam session at the Marsh Creek Skatepark. This will be a free public event to celebrate Ray with an amazing display of local and legendary skate talent, and to raise funds for the Ray Underhill Foundation, which supports critical Chordoma research and assists NC families affected by the disease.

Get Rad For Ray is a family-style event that will feature a festival area with food and vendors, as well as three different skateboarding events. A beginners’ skate clinic will start the celebration and get kids new to the Marsh Creek Skatepark off to a solid and safe start. An amateur contest will give local talent the opportunity to shine and impress. And the day will conclude with an 80s-themed Legends skate jam, featuring top new talent mixing it up with some of the most famous names in skateboarding—Tony Hawk, Christian Hosoi, Steve Caballero, Eddie Elguera, Mike McGill, Ben Raybourn, Kevin Staab, Grant Taylor, Brad McClain, Ben Hatchell, and Curren Caples among them.

"This is an incredible collection of skate talent," said Hawk. "Top names from the 70s, 80s, and today—all skating together in one event. If I weren’t joining them in the session, I’d definitely want to be there to see it!"

Attendees will have several opportunities to support the Ray Underhill Foundation via donations and raffles throughout the day.

Skaters wishing to compete in the amateur skate contest must register at TheBoardr.com/GR4R.

The fun kicks off at 11 AM, Saturday, October 18, 2014 at Marsh Creek Skatepark and continues through the afternoon. Come help the legends of skateboarding celebrate the life of a true champion, and support the Ray Underhill Foundation’s efforts to assist families and help find a cure for Chordoma.

Ray Underhill Foundation
The Ray Underhill supports research and efforts to battle Chordoma cancer, and assists families affected by the disease. The organization was established in memory of Ray Underhill, a father, husband, friend, and professional skateboarder who passed away in 2008 after a long battle with Chordoma.

The Ray Underhill Foundation raises money to help families that are affected by Chordoma and other cancers, to help them cover expenses that are not paid for by health insurance or government funding. The organization was established in memory of Ray Underhill, a father, husband, friend, and professional skateboarder who passed away in 2008 after a long battle with Chordoma.

Endless Grind
Endless Grind is a skateboard shop in Raleigh NC founded by professional skateboarder and North Carolina native Reggie Barnes in 1986. For over 25 years Endless has been selling skateboards at the same location on Peace Street in downtown Raleigh. Its experienced staff sells skateboards and skateboard-related products, including one of the best selections of skate shoes in NC for men, youth, and girls. Everyone who works at Endless skates, so you don’t have to worry about someone trying to sell you something they don’t use themselves. It isn’t a "boardsports" store or a large dept. store chain, so the staff actually knows first-hand about the products they’re selling. For more information, visit www.endlessgrind.com

Tony Hawk Foundation
A charitable, non-profit organization, the Tony Hawk Foundation was established in 2002 by its namesake, professional skateboarder Tony Hawk. THF promotes and provides technical assistance and funds for high-quality public skateparks in low-income areas throughout the United States that promote healthy, active lifestyles, and to International programs that enrich the lives of youth through skateboarding. For more information, visit www.tonyhawkfoundation.org

The Boardr
The Boardr is a group of friends specializing in what they have loved since first sight: Skateboarding. They create and run fun, authentic events, both large and small. Some of the events go down in their TF, but the majority are around Florida, the US, and abroad. The Boardr staff are good at the boring stuff, too, which isn't boring to them: Project management, marketing and branding, custom software apps, management and representation, and more. The Boardr is committed to pushing skateboarding on all levels. For more information, TheBoardr.com/About

Get The Boardr Newsletter

March 13, 2021
The GFL Series is a national, all ages and skills series in both street and bowl benefiting the Grind for Life Organization, a 501(c)(3) non-profit that assists cancer patients with travel expenses.

Grind for Life Series at Zephyrhills

April 3, 2021
The GFL Series is a national, all ages and skills series in both street and bowl benefiting the Grind for Life Organization, a 501(c)(3) non-profit that assists cancer patients with travel expenses.

Grind for Life Series at Lakeland

May 8, 2021
The GFL Series is a national, all ages and skills series in both street and bowl benefiting the Grind for Life Organization, a 501(c)(3) non-profit that assists cancer patients with travel expenses.

June 6, 2021
A day of celebrating the life and times of the late, great Harold Hunter.

Late 2021 POSTPONED
A BMX event in a Florida swamp.

Round Up at The Ranch